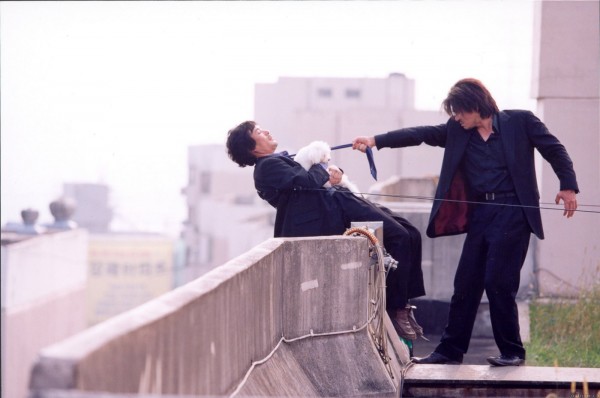 I finally saw Park Chan-wook’s Oldboy today– the uncompromising mother-of-all revenge films. This is not for the weak hearted. Or the weak stomach-ed. It is violent, but mostly the way Tarantino is violent– you see the perpetrator, not the victim, but what is being inflicted is so vile that your imagination takes over.

But it is, after all, a revenge film. But it’s more than that– it is an epic tragedy. It is raw and brutal in its violence and sexuality. And it is gorgeous– you could pause the movie at any point, and you’d have a hyper-stylized poster.

Oh, and it’s Korean; though the Netflix streaming version is dubbed.

Chan-wook’s JSA is one of the best movies of all time, and not as violent. Next up, I need to see Sympathy for Mr. Vengeance and Lady Vengeance. Yes, he has a Vengeance Trilogy.

For Bollywood types, Oldboy was copied recently as Zinda starring Sanjay Dutt. I haven’t seen it, but I’m guessing they’ve left some things out. I’m not sure Hindi cinema is ready for… well, I’m not going to give it away.

One thought on “Mr. Vengeance”