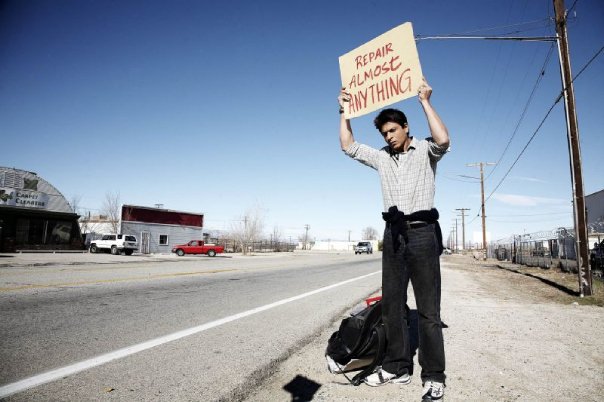 I’m just going to put down my initial thoughts about the movie that I just saw, Karan Johar’s My Name is Khan. I don’t think I can review this film, in any traditional sense. It is too full, too much going on, too many good things and even more bad. So I’ll just talk about things that left an impression.

This movie shows an America that has never been shown in a Hindi film. There are shots in the desolate south-west– Santa Fe, New Mexico. Arizona. Run-down diners and motels in-the-middle-of-nowhere, USA. There is a significant section of the film, with meaningful characters, set in a small, black town in Georgia. Have we ever had black characters in a mainstream Hindi movie who were not caricatures or stock villains?

I can’t believe I watched a Hindi movie with a major character named Mama Jenny, who’s kid Joel leads a small black church in singing We Shall Overcome. I also can’t believe that there was a message in this small town that was not drummed in to the audience’s head. That message was– whatever real or perceived slights you think the muslim community has faced in the USA are nothing compared to other marginalized communities. If you think you have a grievance, you want to complain, get in line. If you, as a Muslim/brown/bearded/turbaned man in America think you face dirty looks or sporadic acts of vandalism, tough luck. You’re not the first, or the worst off.

As the story of a Muslim man mistreated in America, the movie slightly overplays the problems faced by immigrants, or people with Muslim names or appearances. The problems of discrimination are a lot more subtle than the movie will admit. For most people, discrimination is a ghost. You feel it but it’s hard to prove that it exists. It’s not so much people throwing things at your window or beating up your kid at school. Real discrimination is not cinematic– it is mundane everyday stares, snubs and things that weigh on the soul. Things that don’t make for a Bollywood spectacle.

Shah Rukh Khan plays a version of Shah Rukh Khan, but a subdued and mannered one. He usually plays Shah Rukh Khan first, and the character second. This time the character has Asperger syndrome– he plays Rain Man first, SRK second. It’s a tough character to play, because he can’t emote. Of course, this doesn’t mean that he does not emote– this is Shah Rukh Khan. While this is not the restrained Chak De/Swades SRK, he doesn’t emote the way a Raj/Rahul/stock-chopra-johar-SRK would. There is no close-up shot of his face, with a tear at the corner of his eye, smiling through the tears, with the beginning of a smirk. You know the look– when SRK is riding away on the train in DDLJ, or when everybody knows he’s dying towards the end of Kal Ho Na Ho, or when he’s standing by the side as Kajol marries Salman in Kuchh Kuchh. The camera will show his face, and he will cry/smirk/eyebrow-twitch. Well, he doesn’t do that in this movie.

And, while I love Shah Rukh Khan, I think the cry/smirk gets overused. Especially in movies that have a Chopra or a Johar in the producer’s* chair. Having said that, his is the first Karan Johar movie I would recommend. With some reservations.

Finally, I can’t tell you how refreshing it was to see Kajol, even though I’ve never been a big fan. I think I’ve just missed old-school actresses who play it straight for romance and melodrama, without the razzle dazzle.

[* Yes, I said producer. These folks are not really directors. This is only Karan Johar’s fourth movie as a director in 12 years. And that kid Aditya Chopra has only directed three in the past 15 years. For the amount of attention they get, you would think there was more going on.]

2 thoughts on “Initial Thoughts: My Name is Khan”